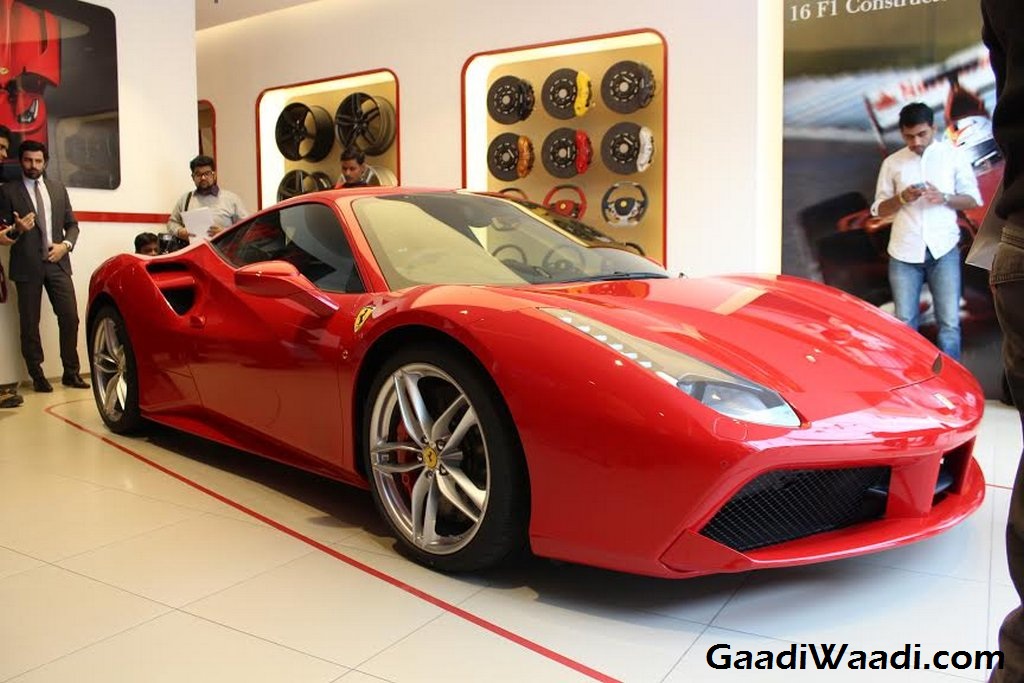 Ferrari’s re-entry into the Indian market saw the evocative Italian supercar maker launching the beguiling California T with a bi-tubro fitted for the first time in decades since the exemplifying F40. It is the open-top successor of the iconic brand’s first front-engined V8 model, California, with revised front fascia to look as similar to the FF.

It carries an ex-showroom price tag of Rs. 3.45 crore and is sold since August last year from the newly established sales networks in Mumbai and New Delhi. Within six months of its launch, the prancing horse has pounced again as the cloaks have been lifted off the 488 GTB at a special event in New Delhi. It is stapled with a price of Rs. 3.88 crore (ex showroom, New Delhi) and let us unwind you through what the new hustler is all about. The two-seater Berlinetta first appeared globally at the 2015 Geneva Motor Show and while the California T is a crowd-fetcher with its modern body style and let alone the Italian artistry in crafting a phenomenal mouth-drooler, the 488 GTB is just on the other end of the spectrum. Created to hone the race tracks, the 488 GTB has a tempting tenaciousness wrapped into a scarlet red four-wheeled ground hugger. The successor to the gorgeous Ferrari 458 Italia has been stuffed with numerous technologies Ferrari has learned from the world-renowned F1 division to make it go faster and faster. Looking at it you won’t be excessively pleased by the design as in comparison to the 458 Italia, which for me is the most adoring Ferrari in decades, the 488 GTB body panels have been sculpted to foster more performance and the edgy design ethos was to dissect the airflow up front and make it smoother on the cuts, scoops and creases to increase downforce with minimal drag co-efficient when the right-foot is floored to the ground.

The headlamp cluster and integrated LED lights are inspired from the 458 Italia with the front splitters reminisce that of the flagship La Ferrari. The swoopy bonnet has been derived from the GT racing Ferraris and it channels air to the side bodywork and on to the blown rear spoiler with massive rear scoops on the massive wheel arches deviates air for engine and gearbox cooling purposes whilst aiding aero efficiency. Active aero flaps under the rear diffuser also adjust position automatically based on car speed to keep the backend glued to the ground and the GTB has smoother round-ish taillights and twin exhaust pipes amplifying the oral note. For starters, the GTB stands for Gran Turismo Berlinetta which addressed many iconic models in the brand’s nearly eight decade-long history such as 250 GTB, 275 GTB, 308 GTB and most recently the 599 GTB. The 488 is the cubic displacement of each of the eight cylinders. Responsible for the 488 GTB’s ferociousness is the all-aluminium dry sump, 3.9-litre twin-turbocharged V8 engine from the F154 family mounted longitudinally rear-mid.

It punches out a maximum power of 661 hp at 8,000 rpm and 760 Nm of peak torque at 3,000 rpm with specific power and torque outputs per litre greater than any Ferrari road car produced. Power is transmitted to the rear wheels through a GETRAG-made seven speed dual-clutch automatic transmission as seen in the 458 with F1 technology induced. The stopping power is dealt by 398mm front and 360 mm rear carbon-ceramic brakes incorporating technology from the La Ferrari whilst the new lighter multi-spoke alloy wheels are specifically designed. The 488 GTB can do the 0-100 kph sprint in just three seconds which is as similar to the 458 Italia and can top out an electronically-limited 330 kph (205 mph). It measures about 4,568 mm in length, 1,952 mm in width, 1,213 mm in height and has a wheelbase of 2,650 mm with 1,475 kg kerb weight.