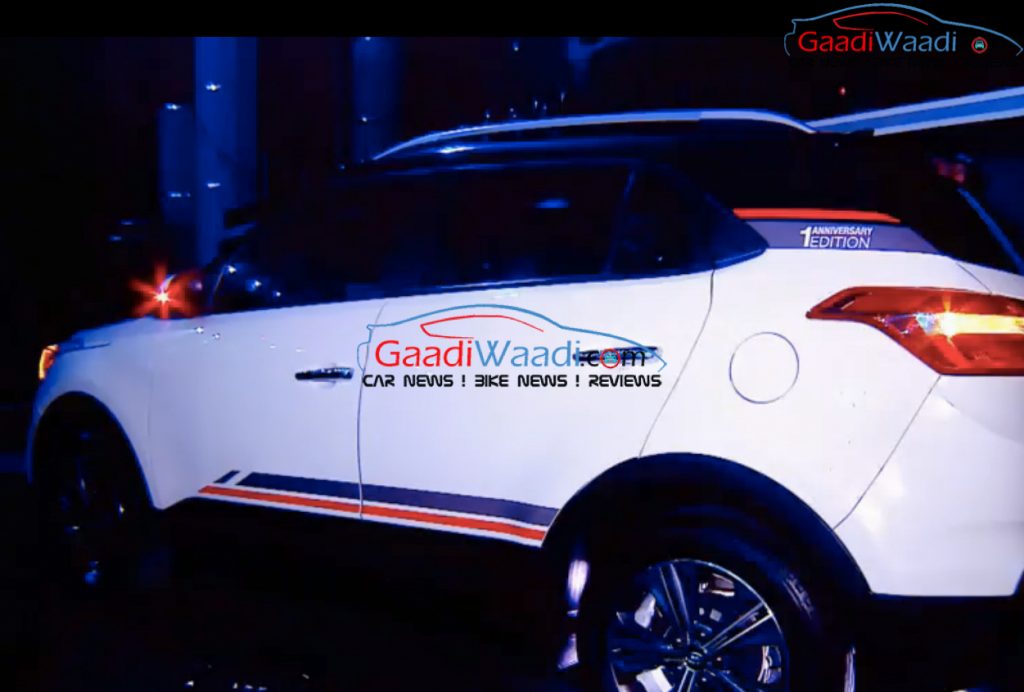 Hyundai Creta is one of the most popular compact SUV in India. The car was launched on 21st July, 2015 in the country, and since then it has garnered popularity immensely. Now, with almost one year passed, the South Korean automaker is celebrating the anniversary of the model. In a fitting manner, Hyundai India is launching an anniversary edition of Creta on 7th July.

Being a special edition, the Hyundai Creta Anniversary Edition will bear the special badging and colourful side body decals. Meanwhile, we have got a glimpse of the upcoming car which features Blue and Red stripes running between fenders just above the side body cladding. The thick C pillar probably would get an all black look with Blue and Red colour stripes and the “1st Anniversary Edition” lettering as well. The roof received a contrasting paint job as well. Apart from that it will get 17 inch diamond cut black alloy wheels. The rear profile also gets the dual tone stripes. The Hyundai Creta Anniversary Edition will be bit similar to the Hyundai Elite i20 Anniversary Edition. Expect the compact SUV to adorn some special edition badging or design elements inside a fully blackened cabin.

Additionally, it is expected to receive some extra features in form of illuminated door sills, new seat covers and floor mats with special edition lettering. The automaker is planning to offer a car refrigerator with this model as well. The Hyundai Creta Anniversary Edition will come based on the SX trim which means the car will be available in diesel option only, with manual transmission. The powertrain will be a 1.6 litre CRDi diesel engine mated to a 6 speed manual gearbox. The special edition model will come with a price tag around Rs. 12.70 lakh. The car would be offered in three different shades which are Polar White, Sleek Silver and Passion Red. Also to keep the exclusiveness intact it would be sold in a very limited number.