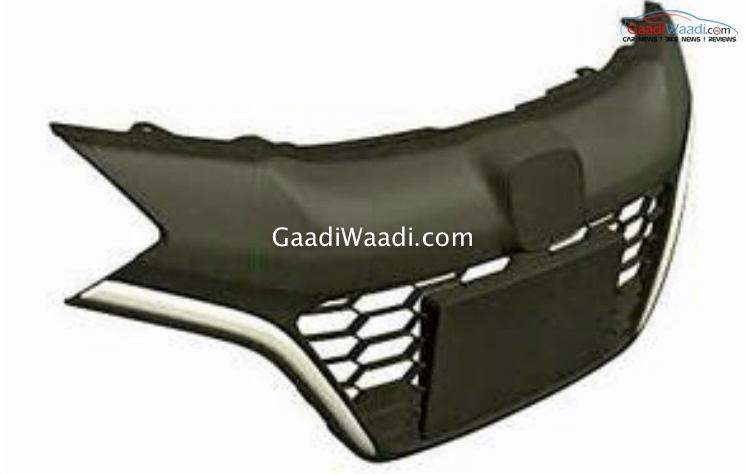 Last month we revealed that Honda Cars India has commenced production of the Jazz based crossover’s prototype in India. On another exclusive, we can showcase the front grille that will go into the production version of the crossover. The leaked cut away image clearly indicates a front end that looks identical to the third generation Jazz launched last July for the domestic market.

The City-inspired wraparound headlamps with integrated static bending lights and the blatantly visible honeycomb mesh pattern are expected to be featured in the WR-V as well with lots of cuts and creases determining the overall shape of the crossover. The prominent Honda badge will be housed in the middle of a thick black bar while the sleek chrome strip offered in the current Jazz could be made available as well with round-shaped front fog lamps. With the crossover’s testing is expected to begin soon on Indian roads, the WR-V crossover has already been spotted running trails on foreign soil. The Japanese manufacturer is looking to rejuvenate its local operations through the WR-V which is based on the same platform as the Jazz premium hatchback.

Internally codenamed as 2FM, the rendering images of the new crossover posted here will give you some idea into how the exterior styling will look like. The crossover space has been attracting crowds in large numbers lately as proved by the segment-leading Hyundai i20 Active alongside other offerings such as Volkswagen Polo Cross, Fiat Avventura and Toyota Etios Cross. It will be a luring prospect for Honda to have such a model in the market considering the popularity of the Jazz. It could be introduced as early as next year and is expected to be slotted between the Honda Fit/Jazz and the Honda HR-V globally. As Brazilian market holds huge potential for the crossover space, Honda is believed to host the global premiere at the 2016 Sao Paulo Auto Show in November.

The Honda WR-V crossover will internationally derive power from a 1.5-litre i-VTEC FlexOne (petrol/ethanol) engine carried over from the Fit/Jazz and it will be coupled with a standard five-speed manual or CVT automatic transmission. The motor is good enough to churn out 115 hp maximum power and 149 Nm of peak torque. However, the possibilities of the WR-V crossover sourcing engines from the Jazz – 1.2 petrol and 1.5 diesel – are very high for the Indian market.
Rendering Image Source: QuatroRodas Brasil