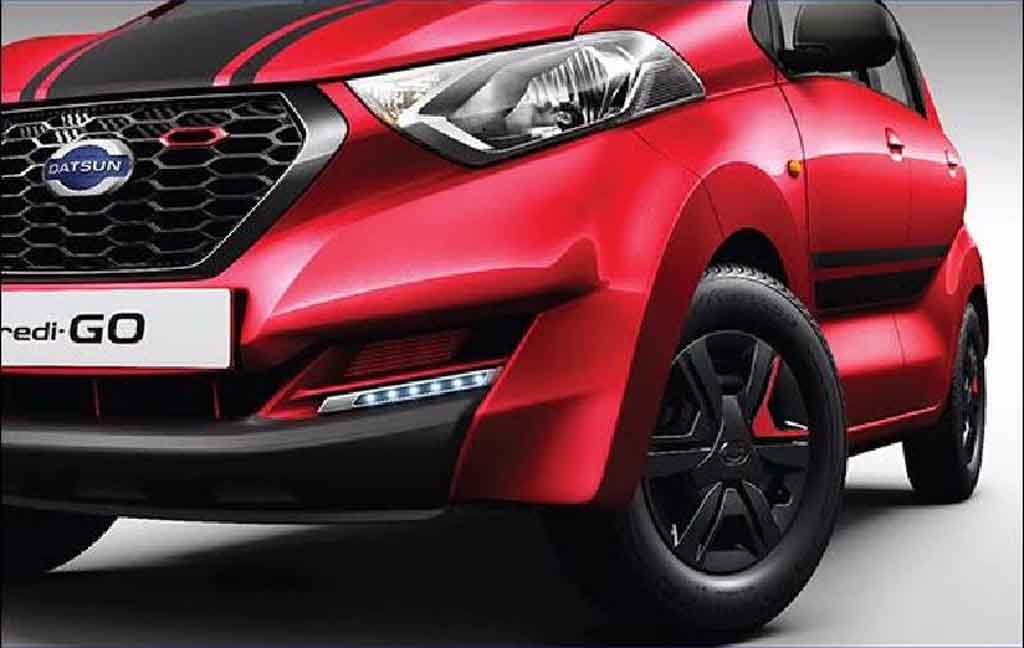 Datsun has launched Redi-Go Sport ahead of festive season, which sports some cosmetic updates like racing stripes, new colour for front grille and wheels. Some interior features have been introduced as well. The car is launched as a limited edition model and is expected to boost the Redi-Go’s sales in the country during festive season.

Redi-Go entered the highly competitive entry level car segment in India, earlier this year in June. In short span, Redi-Go grabbed attention immediately, and since launch it has sold more than 10,000 units. Not only that, this car has been attracting several buyers away from Maruti Suzuki Alto 800, Hyundai Eon and even Renault Kwid as well.

The car is a perfect urban commuter for those, who are on tight budget. Datsun seems to be pretty overwhelmed by the positive response of the car, which is why it launched a sportier version in the form of Redi-Go Sport. Here, we take a close look at the Datsun Redi-Go Sport: The Datsun Redi-Go Sport takes power from the same 0.8-litre petrol engine, which powers the Redi-Go regular model. The 799cc, three-cylinder petrol engine, mated to a 5-speed manual transmission also does duty in Renault Kwid 0.8L; and churns out 53 BHP of peak power at 5,678 RPM and 72 NM of peak torque at 4,386 RPM.

The car gets H-shaped torsion beam with double pivot arm, which offers high stability to the car, and comfortable experience to the occupants. On the braking front, the hatchback comes equipped with performance augmented brakes, which ensures short responsive time from brake pedal to wheels.

The 0.8-litre petrol engine delivers 25.17 kmpl of fuel economy, which is similar to the Renault Kwid as well. The Datsun Redi-Go Sport can be differentiated from the regular model through the racing stripes, shiny black front grille and the black alloy wheels which altogether deliver a sporty vibe. The front fascia of the car gets the hexagonal grille completely blackened out, while the bonnet of the car dons black sports racing stripes.

Apart from that, the alloy wheels also come blackened out, with a single spoke painted in body colour, which surely makes the appearance unique. Apart from that, the side profile dons black racing stripes, while at rear fascia the car receives a roof spoiler. So far, the Redi-Go Sport looks muscular and sporty. The car is available in three different colours – Ruby, White and Grey.

Dimensionally, the Datsun Redi-Go Sport remains same as the regular hatchback. It measures 3,429mm in length, 1,560mm in width, 1,541mm in height and wheelbase of 2,348mm. The car also comes with a ground clearance of 185mm, which is very much practical for a car to take on the pothole challenge; the Indian roads throw at the cars.

Datsun Redi-Go Sport offers sufficient room for five occupants. Being a tallboy hatchback, the car offers ample amount of headroom, and the 222-litres of bootspace ensure decent room for luggage.

The Datsun Redi-Go Sport is based on the S trim of the regular model, which gets driver airbag, engine immobilizer, central locking, and child safety lock as standard features. Therefore the safety features in the upcoming car are expected to be the same like the Redi-Go. Datsun also claims that, the Redi-Go gets reinforced crash protection shell, which absorbs the impact giving the occupants better safety.