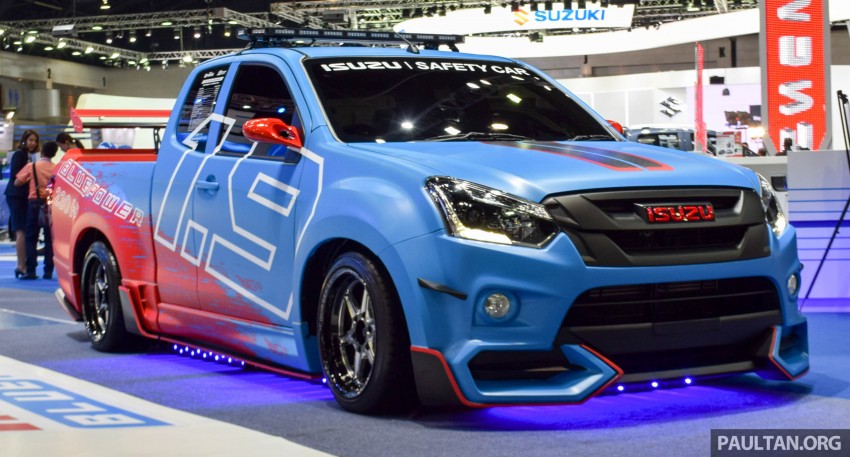 Isuzu D-Max Safety Car made its debut appearance at the 2015 Thailand Motor Expo and although one might wonder why it’s christened as Safety Car rather than a “Safety Truck”. Its striking appeal, sporty bodykit and enormous twin-blade rear wing drive us towards the notion that the D-Max Safety Car is nothing more than an one-off Motor Show eye-catcher.

The sporty aero bodykit extensively altered front and rear bumpers for a sturdy front and rear end. It has side skirts to channel the undisturbed air to the Touring cars-styled rear diffuser and a huge twin-blade rear wing that has an inclined end plate. Well, Isuzu may never put them on road anyway so these aftermarket sticker wraps and mods are just a visual treat for expo-goers.

To stand by its Safety Car label, an LED emergency light bar is installed on roof top whilst the Hot Bits suspension makes for revised setup and a low ride height and the 18-inch alloy wheels are fitted on Toyo Proxes T1R 275/35R18 tyres.

The Isuzu D-Max Safety Car is powered by a tuned version of the all-new 1.9-litre Ddi Blue Power turbodiesel engine which boosts the horsepower from standard output of 150hp to 230hp and a suspected peak torque figure of around 350Nm. However, the most interesting aspect of the super truck is that it’s based on the facelifted D-Max extended cab also seen at the Bangkok show. The extended D-Max cab in Hi-Lander guise bears minor differentiation on the outside but under the hood it’s propelled by an all-new 1.9 litre Ddi Blue Power turbodiesel engine that replaces the 2.5 litre diesel mill and a new six-speed automatic or a new six-speed manual gearbox. The new engine is 20% lighter and produces similar horsepower as the outgoing engine with 150hp at 3,600rpm and 350Nm of torque between 1,800 and 2,600rpm.